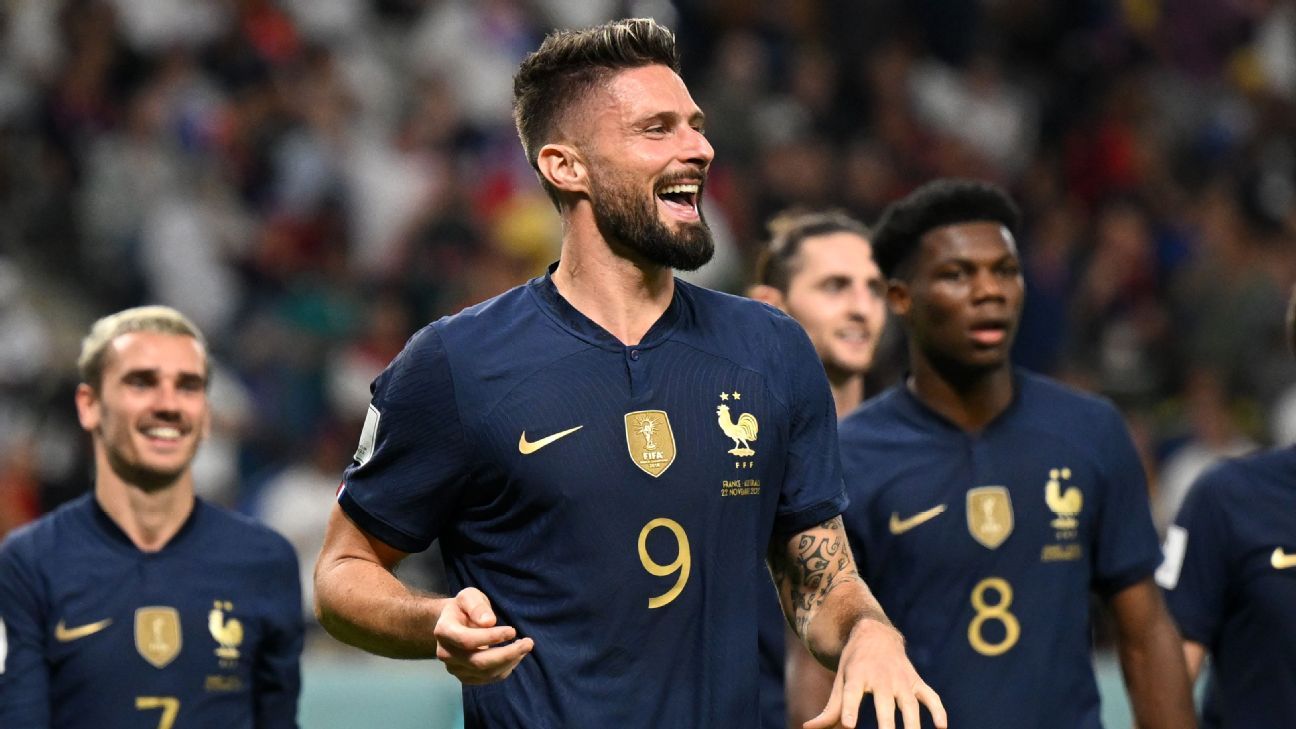 Olivier Giroud moved level with Thierry Henry as France’s all-time top men’s scorer after his brace led the World Cup holders to a 4-1 win over Australia in their Group D opener at Qatar’s Al-Janoub Stadium on Tuesday.

Craig Goodwin gave the Socceroos a shock lead when crashing in a shot at the back post in just the ninth minute. But France soon roared to life and by half-time had the lead after Adrien Rabiot and then Giroud scored in the space of five minutes.

Two more quick fire goals came midway through the second half. Kylian Mbappe announced himself to the tournament with his first goal in Qatar before setting up Giroud to head in his 51st goal for his country three minutes later.

Les Bleus are the first defending champions to win their opening match since Brazil in 2006, which has already put them in a good position to advance from the group phase, something Italy in 2010, Spain in 2014 and Germany in 2018 failed to do.

The result puts France top of the group, ahead of Denmark and Tunisia following their goalless draw earlier in the day. It will also be a significant boost for coach Didier Deschamps and his side after the buildup to the defense of the title they won in Russia in 2018 was dominated by injury absences.

Ballon d’Or winner Karim Benzema was the latest and biggest of those absentees, following an injury suffered in training on Saturday, joining a long list that already included Paul Pogba and N’Golo Kante.

But there were impressive performances for those who took their place as France showed they will not relinquish their trophy lightly.

“We got a scare but reacted quickly afterwards,” Giroud, who also replaced Zinedine Zidane as France’s oldest scorer at a World Cup, said. “Even if we could have scored more goals, we found each other, we were efficient.

“It’s very good for our self-confidence to have turned things around. We’ll have to learn from these little mistakes however.”

It was not quite the start France were expecting in Al Wakrah, however.

Goodwin smacked the ball into the roof of the net from Mathew Leckie‘s cross from the right, leaving Lucas Hernandez holding his right knee after being beaten to the ball.

France later confirmed that Hernandez had ruptured his anterior cruciate ligament, ruling him out of the rest of the tournament.

Hernandez’s brother Theo came on as a substitute and France continued to struggle to create space, with only Mbappe threatening on his left flank.

Australia were much more direct, making the most of Les Bleus’ non-existent midfield.

It was, however, Rabiot who leveled in the 27th, leaving his marker behind to head home from Hernandez’s cross.

With Mbappe moving more centrally, the Australia defense had one more problem to deal with and that was clear when the Paris Saint-Germain forward’s back heel inside the area was collected by Rabiot, who slid the ball across for Giroud to tap in.

They played more freely from then on, with Antoine Griezmann‘s low shot going just wide and Mbappe skying his attempt over the bar as he raced to meet Griezmann’s cross from the right.

Mbappe caused more chaos early in the second half but could not quite find the breakthrough, until he silenced the Australian fans, who in the first half were shouting ‘Who are you?’ at him, with a glancing header in the 68th minute.

Three minutes later, Giroud headed home from Mbappe’s cross before falling on his back in apparent disbelief and being surrounded by his team mates in a goal celebration that lasted longer than usual, giving an exhilarating feeling to France’s win.

It took Giroud, who owed his place in the starting lineup to Benzema’s absence, 115 international appearances to score his 51 goals, while Henry needed 123 from 1997-2010.

There were more chances for France through Hernandez and Ibrahima Konate but the result was satisfying enough, bearing in mind that in 2002 the defense of their title started with a 1-0 loss to Senegal and was followed by a first-round exit

Australia coach Graham Arnold said his team ran out of gas against a superior side.

“Look, at the end of the day, they’re a quality side. They are world champions for a reason,” he added.

“I thought the first half, we did well. Second half, we ran out of legs a bit, but that’s the type of level of those players play at.”

France will next take on Denmark on Saturday after Australia face Tunisia earlier in the day.

Information from Reuters was used in this report.