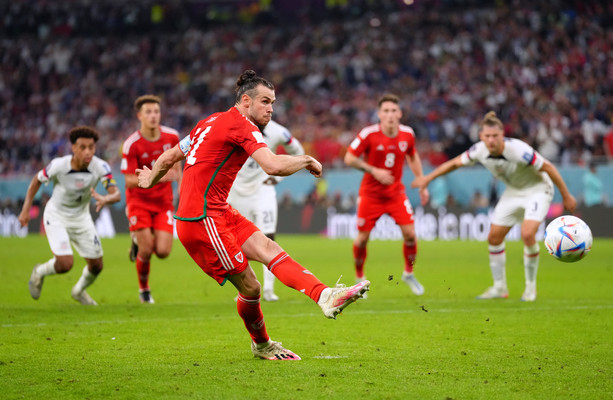 HE MAY NOT have had the courage of his convictions to maintain his support for LGBTQ+ rights, but Gareth Bale showed his mettle from the penalty spot to breathe life into Wales’ World Cup campaign.

A peripheral, frustrated figure until the 80th minute, the 33-year-old then showed why his presence is still so crucial to a side that relies on his ability to conjure up moments of significance.

He anticipated the breaking ball in the box after a quick throw-in led to an attack and got his body in front of Walker Zimmerman to draw the foul from the USA defender.

Bale then stepped up to smash home from 12 yards, pilfering a point from a game they had themselves back into after a first half which left them catching their breath.

As Bale stood over the ball on the penalty spot, the camera zeroed in on him preparing to convert, puffing out his cheeks with flecks of gray in his beard hinting at the stage of life he finds himself in.

Bale never blinked. There was no mistake.

He was emphatic and assured. The kind of instincts which were sadly absent before kick-off.

As well as that crucial 82nd-minute equalizer, Bale also got a first-half yellow card. But it was borne from the frustration and anger at what seemed to be the dying of the light rather than as punishment for having the backbone to wear a captain’s armband supporting LGBTQ+ rights.

The Wales captain was a passenger in a relentless opening 45 minutes, his sole contribution to the evening at that point being the caution he received not long before the break for a reckless tackle from behind on Yunas Musah.

He scooped the ball but only after crunching the midfielder’s ankles first.

The tank of goodwill towards Wales – making their first World Cup appearance in 64 years – had also been drained significantly when they were among one of seven European countries to backdown and not wear the One Love armband they had been so keen to promote in the build up to the competition.

Fifa’s threat of a yellow card to the player who wore it – in this case Bale – was sufficient for the respective FAs of Wales, England, Germany, Belgium, the Netherlands, Denmark and Switzerland to wilt.

Turns out they are only willing to see through a Fifa-approved protest. They want to make empty gestures that appear significant as long as there are no actual consequences.

On the pitch, Wales were similarly toothless. They looked labored and nervous, and it seemed as though they would suffer at the hands of a sharp, energetic and fearless USA side. The Americans’ display was at complete odds to Bale and Wales, who were caught in a daze by the occasion, and also their opponents’ verve.

As the Welsh toiled, Bale giving the ball away cheaply on a couple of occasions and trying his best to be the target man for aimless long balls, the USA smelled blood.

Timothy Weah – son of the legendary George Weah – produced a stunning finish with the outside of his boot after a decisive run across the front from his position on the right was expertly picked out by Christian Pulisic.

The Chelsea star had collected the ball centrally and driven forward, adding that final pass to complete the kind of move that had been a hallmark for Wales teams of the past when Bale, and midfielder Aaron Ramsey, were in their absolute prime.

Both are now the wrong side of 30 and this World Cup swansong was beginning to feel like a veteran crooner attempting to reach the high notes that were no longer possible.

The pace eased after the interval but still Bale remained on the periphery. Until he found his moment.

Substitute Keifer Moore, introduced at half time for the ineffective Daniel James, had given Wales a focal point in attack and, as the pace of the game settled and the intensity lessened, they began to find a foothold.

That is when Bale, now 33, came to prominence and reminded everyone that he is still adept at making an impact.

One way or another.