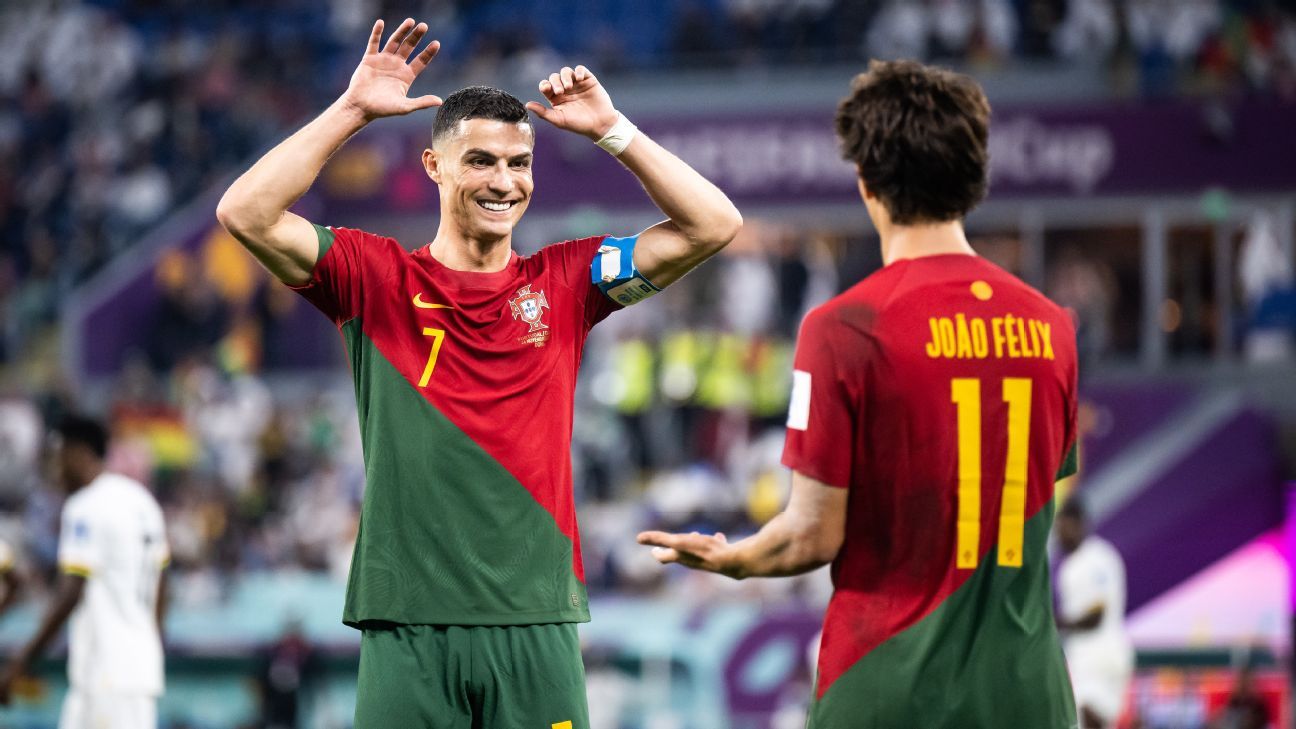 Ronaldo, who officially left Manchester United on Tuesday, scored with a second-half penalty. And although Andre Ayew made it 1-1, Portugal took control with two goals in two minutes from Joao Felix and Rafael Leao. Osman Bukari came off the bench to make it 3-2, but Portugal held on despite a late score when the goalkeeper Diogo Costa nearly conceded a bizarre chance in the final seconds of injury time.

1. Portugal attacking talent sees them through, but there are issues at the back

It’s perhaps obvious that when you’ve got attacking players like Ronaldo, Felix, Leao, Bruno Fernandes and Bernardo Silva, you’re going to have no problem scoring goals. It was lucky Portugal got three against Ghana.

The Black Stars, who scraped through qualifying after a playoff with Nigeria, don’t usually score many, but they got two here, first through Ayew and then Bukari. Bukari’s late header didn’t count for much after Portugal had gone up 3-1, but it was still enough for Ronaldo, at that point sat on the substitutes bench, to throw his hands up in despair.

Portugal have the forward players to match any other team at this World Cup, but they are going to struggle defensively against better teams than Ghana if they keep having lapses in concentration at the back. That was best summed up in the final minute of stoppage time when Costa rolled the ball out and was almost robbed by Inaki Williams.

2. Ronaldo gets his goal despite first-half frustration

It looked like it might be one of those frustrating nights for Ronaldo — the type he has had plenty of at Man United this season — but in the end he got his goal to become the first men’s player to score at five World Cups.

His evening started with a clumsy foul after just 90 seconds, and before 15 minutes were on the clock, he had fluffed a good chance from Otavio’s pass because of a heavy touch and had missed with a header at the back post. He would have been forgiven for thinking it wasn’t his day when he had a goal ruled out after 31 minutes for a foul on Alexander Djiku and then took a heavy knock on his right ankle Seidu Alidu.

But after a week of headlines about his interview with Piers Morgan and his messy departure from United, it was typical of Ronaldo to find the net — first showing a dart of pace to win a penalty under a challenge from Mohammed Salisu and then stepping up to smash in his 118th international goal. It’s never a bad thing for a free agent to show that he can still score goals at the highest level.

3. Ghana have improved from the AFCON nightmare, but Portugal proved too much

Ghana have arrived in Qatar as the lowest-ranked team at the World Cup, and all they need to do for this tournament to be deemed a success is to improve on their disastrous Africa Cup of Nations in January, when they finished bottom of their group with one point from three games and lost to Comoros.

They struggled to score goals in qualifying — they got eight in eight games — and it took them a while to get going here, ending the first half without a shot, let alone one on target. Mohammed Kudus of Ajax Amsterdam was lively in midfield, but they need to create more chances for Williams, who switched allegiance from Spain in the summer.

Ghana were organized enough to keep Portugal’s attacking players quiet for large spells, but if they’re going to sneak out of Group H, they need to get something from games against Uruguay and South Korea.

That pair’s 0-0 draw earlier on Thursday keeps Otto Addo’s team in the conversation for a place in the knockout rounds, but they will need to cut out the mistakes that allowed Portugal to score two goals in two minutes to put the game to bed. Bukari’s header to make it 3-2 came too late, but they will still feel disappointed after Williams came so close to pinching a dramatic equalizer from under Costa’s nose.

BEST: Bruno Fernandes, Portugal. With the game poised at 1-1, Fernandes came up with two beautiful passes to set up goals for Felix and Leao.

WORST: Seidu Alidu, Ghana. He was lucky not to be sent off for an apparent head-butt on Felix, having already been booked, and had to be substituted for his own good.

How many NBAers can Ronaldo outjump? The Portugal captain is notorious for his fitness, and it’s pretty obvious he doesn’t skip leg day.

The moment when Ronaldo became the first man to score at five World Cups.

With this goal, he becomes the first men’s player to score in five different FIFA World Cup tournaments 🔥🇵🇹 pic.twitter.com/PxWP4Z5z8o

After the match: What the players and managers said

Portugal manager Fernando Santos: “I told the players at half-time that it was important to stay focused and increase the pace. We entered the second half well, we scored the goal, then I don’t know what happened. We conceded goals that came out of nowhere . No one can concede goals that come out of nowhere. We woke up again, got back into the game, scored two goals.”

Neves: “It was very important to start with a victory; that was our objective. There are no easy games, all teams are organized. We won in a difficult and strange game. We controlled the first half and Ghana just defended. Then in the second half with our goal, there was more pressure from Ghana; maybe we should have been more pragmatic. The way we reacted to the Ghana goal was crucial. We didn’t go down; we were positive, we reacted well and quickly. It was a deserved victory despite the difficulties we faced in the last stages of the game.”

– Ronaldo has now scored eight World Cup goals for Portugal, the second most in the nation’s history behind Eusebio’s nine.

– Ghana is the 27th team Ronaldo has scored multiple goals against in his international career. He also scored against Ghana in the 2014 World Cup.

Portugal: Ronaldo & Co. are back in action on Monday, when they take on Uruguay at Lusail Iconic Stadium at 2 pm ET.

Ghana: The Ghanaians also play on Monday, as they travel to the Education City Stadium to face off against South Korea at 8 am ET.