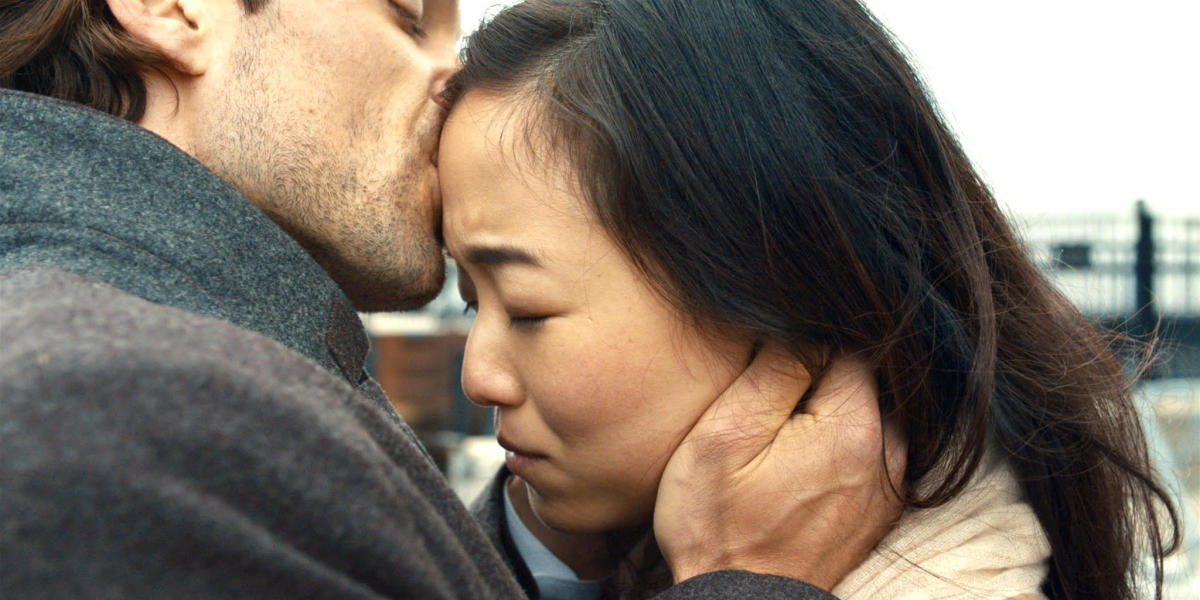 Canadian writer/director Renuka Jeyapalan explores the concept of a one-night romance in Stay the Night (now in theaters), starring Andrea Bang (Kim’s Convenience) and Joe Scarpellino, in a story about one night when a famous hockey player meets a reserved HR professional in Toronto.

“I heard a really good celebrity story about a young woman who went to a Hollywood party and met a very famous actor, and it was clear from their interaction that it could be a one-night stand,” Jeyapalan told Yahoo Canada about where the concept for the film began. “Then the first question that went through her head was, ‘can I be the girl who has a one night stand with a famous actor?'”

“I just love that question. Can I be that girl? Or who is that girl? I also thought, who is that guy? It just raised a lot of questions for me and I kind of wanted to take out all the clichés and…make a more realistic kind of grounded, rom-com kind of film.”

Through these characters, who are both terrified of intimacy but present those fears in different ways, Jeyapalan was able to expand our perception of what a one-night connection can really be.

“There was a movie years ago, Amy Schumer’s Trainwreck,…and she was this party girl and she was so fun, yet her journey was to be like Taming of the Shrew, was to be in a relationship and tame herself,” Jeyapalan added. “I just felt that’s so regressive and this was a chance to have a really kind of positive message about someone’s sexuality, but really someone just being open and part of the world in a real and positive way.”

After losing out on a job promotion because her personality is too “standoffish,” Grace (Bang) takes one step to get out of her shell and meets up with her roommate Joni (Humberly González) at a Toronto bar. When Grace gets ditched after Joni leaves to hook up with a guy she just met, Grace is left alone.

Also at that bar is Carter, who was just dropped by his hockey team and is dreading the move from the NHL, back to the minors.

The pair leave the bar at the same time, getting into the same cab, and that’s where this one-night romance begins.

“What I connected to with Grace was that she has this kind of deep desire to connect, having a meaningful connection with someone, and I think that helps you kind of navigate the character from beginning, middle, end,” Bang said.

While Carter and Grace certainly present differently, they both have a fear of intimacy, with that being a core aspect of how the whole film is framed.

“They’re both terrified of intimacy but from different ways,” Renuka Jeyapalan explained. “Grace is just basically very private and in bed by [8:30 p.m.]a homebody, whereas Carter’s public, he’s literally a public figure, an NHL hockey player, and doesn’t want to be alone.”

“My take was to have these private moments in public spaces, hence my obsession with the view in this movie… Carter’s space really is his hotel room, which is at the top of a tower and you see all of Toronto… and Grace’s space, her bedroom, is very intimate, warm.”

“Grace’s room is also very homey and kind of her sanctuary, and her window is very small compared to Carter’s, which is a little colder because it’s a hotel and the view was beautiful and glorious,” Bang added.

Going one step further, Grace is actually a virgin, which amplifies this fear of intimacy. While the first thing you likely think about when you hear about an adult character who’s a virgin is Steve Carell in The 40-Year-Old VirginJeyapalan has a more earnest approach.

“That is something that is actually quite prevalent, people don’t talk about it,” Jeyapalan said. “When I first started making, reading, writing the script years and years ago, trying to get it made,…it was sort of dismissed.”

“We’ve been screening at film festivals and stuff, and a lot of people come up to me afterwards and say, ‘I really related to Grace, Grace is me.’ That’s so amazing that they connect to her character and it feels real and authentic to their experience.”

For Bang, her goal as an actor was just to authentically play the character and her personal relationship with sexuality.

“I think that at the end of the day, [I tried] not to overthink it,” Bang said. “As long as I bring authenticity and truth to the character, and kind of ground as to why she chose not to have sex yet, I think just doing that kind of helps make it something that’s not like a joke.”

‘I kind of want to earn the CN Tower’

For Torontonians, Renuka Jeyapalan has given us everything we long for in a Toronto-based movie, but rarely get to see: a film that is true to the structure of the city.

“I’m from Toronto, whenever I see something [that’s shot] in Toronto it’s like, wait they couldn’t get to The Beaches from there. It takes me out of the movie,” Jeyapalan said. “I wanted to make an authentic, true, geographically correct film where you could retrace their steps, and it would make sense.”

While many films shot in Toronto are quite quick to show the city’s landmark, the CN Tower, Jeyapalan was more thoughtful about when to show the iconic structure.

“I didn’t want to show the CN Tower until a very pivotal moment [moment] at the end of the movie,” she said. “I kind of want to earn the CN Tower and we see [it] when both of our characters’ journeys are complete, and so the city is now complete, too.”