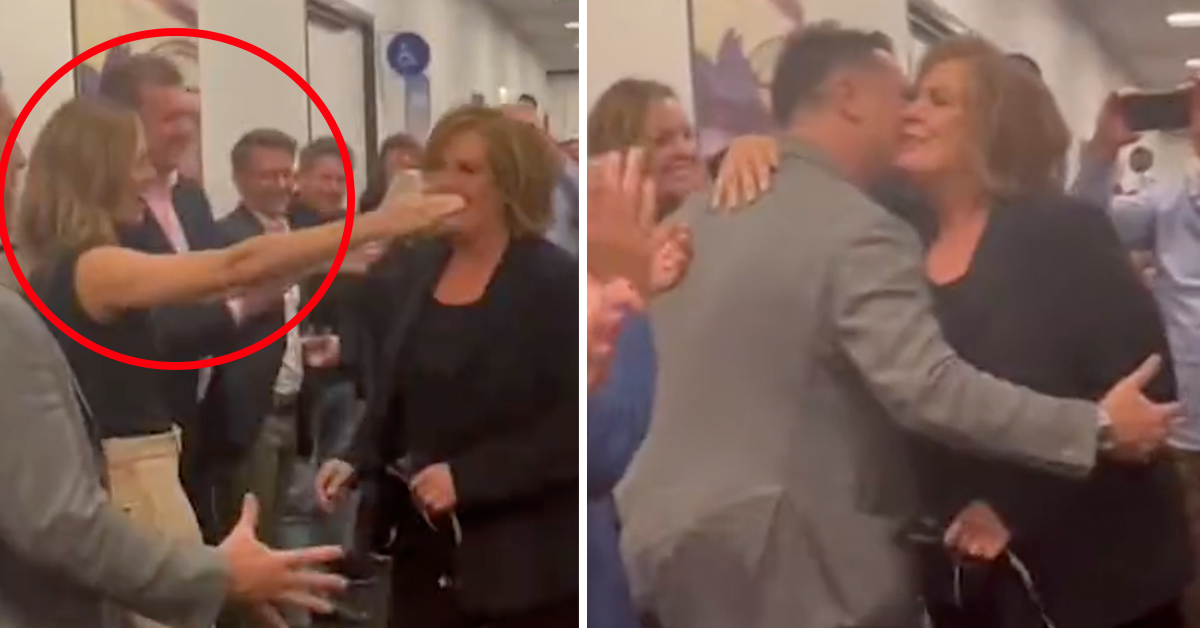 A Current Affair host Tracy Grimshaw has appeared to ignore Today presenter Allison Langdon in an awkward moment after her final farewell to the program on Thursday night.

Tracy announced earlier this year that she would be stepping down from her hosting duties after 17 years, saying she was “too tired”.

Following her final show on Thursday, Tracy was applauded by Channel 9 employees and presenters as she walked through the studio after signing off.

She high-fived some as she walked through the guard of honor, and stopped to hug news presenter Peter Overton. However, when Allison leaned in to hug Tracy, she appeared to take a step back and shake her head before moving on to embrace Today co-host Karl Stefanovic.

The ACA host appeared to brush Allison, which came after unconfirmed rumors Today host was taking over Tracy’s role at ACA.

Radio shock jock Kyle Sandilands fueled rumors earlier this week when he was speaking to Tracy on his KIIS FM show. Tracy remained coy as Kyle asked her to give a hint as to who was taking over, before he claimed Karl told him it was Allison during a personal conversation.

TV Blackbox has also reported Channel 9 is due to formally announce Allison as the new host this weekend.

Allison and Karl joked about the moment Today on Friday morning, proving nothing was as it seemed.

“She completely and utterly blanked Ally,” Karl said as they played footage of the moment.

Today then replayed the clip from another angle before Allison says, “That’s the moment my heart breaks”.

“You straight away turned to me and said, ‘I don’t think Tracy knows who I am’, you were worried about it,” Karl said to Allison.

“I turned to you at the time and said, ‘Tracy Grimshaw just brushed me’, when you get brushed by your hero it hurts, this is a tough moment,” Allison responded.

“Ally, I just watched the guard of honor from last night and I saw you went in to give me a hug and I hugged bloody Karl,” she said in her statement.

“I’m sorry I missed you, was so overwhelmed, and obviously didn’t see your petite head once his big boofhead loomed into vision. Big sorry.”

‘Why did she refuse her hug?’

Viewers seemed to have noticed the awkward moment between Tracy and Allison, with many flocking to social media to comment.

“Telling that Ally went to hug her and Tracy brushed her off! Her successor?” one questioned on Twitter.

“Wonder what the story is here? Why did she refuse her hug?” another wondered.

On another clip of the moment shared to TikTok, people also shared their thoughts on why Tracy appeared to pass over Allison.

“Well that was awkward,” a viewer wrote.

“Omg why is she shaking her head?” another questioned, while another said, “That was strange”.

Others however said the clip may not have given full context to the situation.

“Maybe she has her reasons which she doesn’t need to share, could have been an inside joke too,” one said.

“It looks like she rejected a hug but I don’t think it’s what it looks like. Tracy was smiling at Allison and Allison continues to clap,” somebody else commented.

TV Blackbox also reports the apparent brush could have been due to Tracy being rushed through the crowd and not wanting to ruin their makeup.

In her final sign-off, Tracy thanked all those who had supported her over the years and praised her “incredible team”.

“It’s such a good place to work. It’s the kind of office where people walk around beaming when we’ve rebuilt someone’s house or helped jail a monster who molested them or helped save their business or force a bank or a telco to scrap that bill that was the company’s mistake in the first place.”

Tracy added when she started working at the program the interviews could not be more than four minutes long and now they could sometimes run for the whole show.

“Thank you for watching them. You have let me indulge my own love of a chat, and if you hadn’t watched I wouldn’t have been able to do that,” she said. “Without you, there would be no us.”

Tracy ended by saying her replacement would be announced soon and encouraged viewers to make them feel welcome.

Or if you have a story idea, email us at [email protected]